LONDON: Rafayel on the Left Bank

A few months ago during the Easter bank holiday, I decided to surprise my boyfriend for his birthday with a staycation in London. We have both been working really hard lately so thought we could both do with a little relaxing stay away. I researched a few hotels in London but the 5 star 'Rafayel on the Left Bank' was the one that caught my eye from the start.

I wanted to pick a luxury yet modern hotel which wasn't to far to get to from us. I wanted our stay to the most relaxing quiet place so we could completely recharge and luckily for us The Rafayel on the Left Bank was exactly that for us.

Below I will share some of the greatest things from our stay... 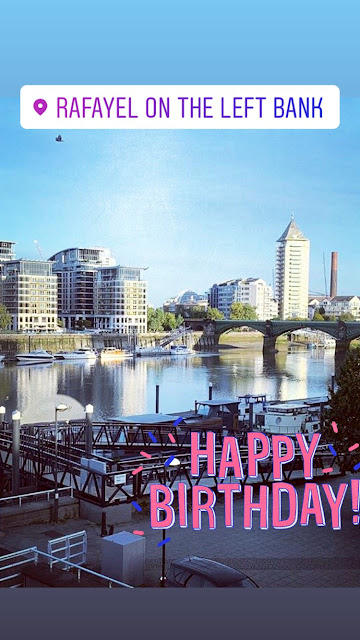 The Rafayel on the Left Bank is situated on the River Thames in Battersea, with views overlooking Chelsea Harbour. The hotel itself is perfectly situated a stones throw away from Sloane Square, Kensington and Chelsea to one side and Clapham the other. This makes it a perfect place to visit if you are visiting London on a long weekend, looking for a place to eat drink and shop, (there is a free shuttle which takes guests to Clapham Junction station shuttle times daily from 7.30am to 10.30pm).

One of the most unique things about the hotel is it is eco friendly, including lights, furnishings and bedding. The hotel facilities are also eco friendly including the Spa treatments which are also on offer here.

There are 65 rooms and 8 suites (which are all named after famous emperors- we stayed in the 'Ceasar suite'). As you can see from below all of the rooms are open planned, with amazing views of the Thames outside. All suites come with a seating area and outstanding luxurious bathrooms, complete with two sinks a walk in rainfall shower '(which is easily big enough for the two of you to shower together) and of course the star of the show its incredible jacuzzi bath. 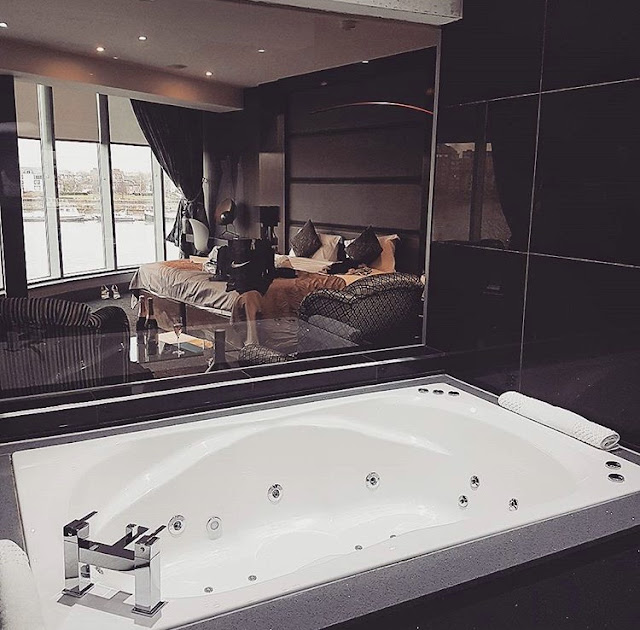 The only downside for us was the toilet, which is also situated in the bathroom next to the jacuzzi bath. Due to the nature of the hotel rooms being so modern, all of the bathroom is open planned and on the entire bathroom (including the loo) is on show from the bedroom. So if privacy is something you are used to in the bathroom this bathroom may put you off slightly. The hotel does provide a black wicker privacy screen which we used to separate the bath from the toilet to give us some privacy, but it worth thinking about before you go- especially if this is the first time away with your loved one. 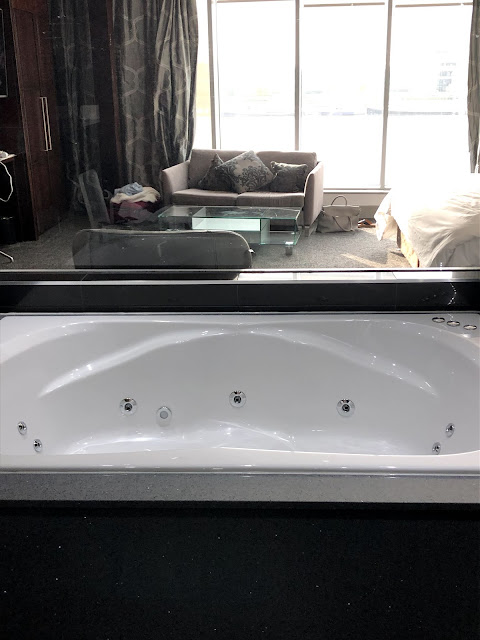 The room also comes with a massive wide screen TV complete with all the usual media and tech any modern hotel is used to- including ipod docking station and wires you can plug your laptops into- making this hotel not only great for leisure but equally as good for business. Hotel also offers a mini bar with a selection of wine, spirits, soft drinks and snacks. (Prices are quite expensive, so you may be better off bringing your own drinks and stocking them in the fridge in the room).

We didn't actually use the Wellness centre facilities (spa and pools/jacuzzi's) as we were out most of the time or in our own private jacuzzi spa in the room, but my boyfriend did try out the gym which he said was a good size with a decent selection of equipment and they provide hotel guests with free waters and towels- this is also free to use for all hotel guests.

In terms of the hotel restaurant we came in for a drink, but as it was quite busy and we will be honest they did look quite short staffed we decided against eating. We did try out their in room breakfasts and room service a few times which was 24 hours and very convenient. Other than this we went out for nice brunches and dinners around various area's in London. 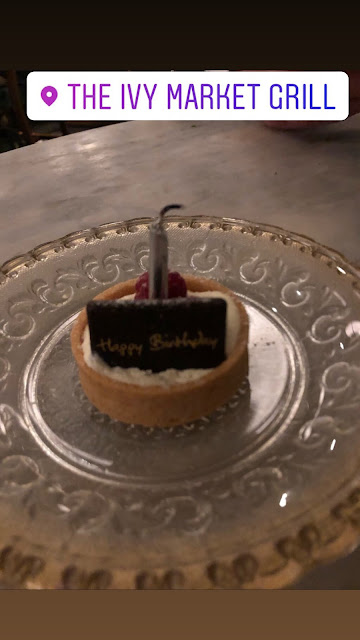 During our two night stay we ended up going out into central London for dinner, we went to Covent Garden's Ivy on my boyfriends birthday and enjoyed a lovely steak meal followed by some even lovelier cocktails. One place i will definitely recommend.

The only downside for me I think is the fact that the hotel is located in the middle of an industrial estate so getting around town is prefered by taxi's. I wouldn't suggest walking anyway as most restaurants are quite far away from the hotel. There is a bus stop outside of the hotel which takes you to Victoria but we decided to get cabs because the hotel isn't near the tubes or any other stations into Central London.

Apart from the lack of public transport near the hotel, we really enjoyed our stay and found it to be very relaxing and great value for money even for a five star hotel. If you are looking for something a bit different which is close to central London and you fancy a dip in your own private jacuzzi jet bath then this is the place for you!!! 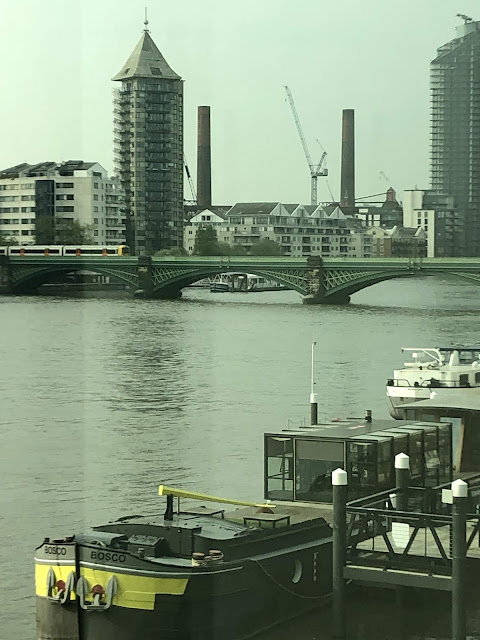 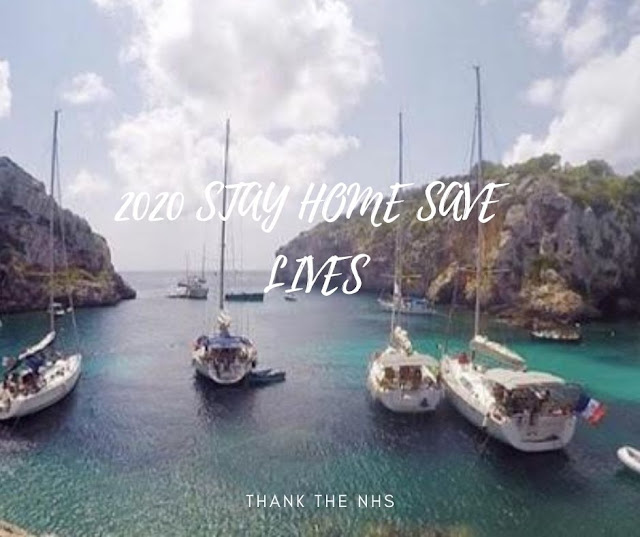 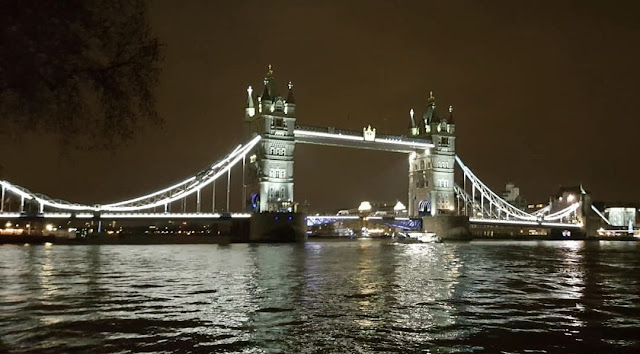